This was posted 3 years 11 months 12 days ago, and might be an out-dated deal. 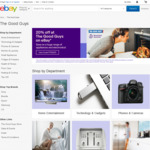 Another eBay deal is upon us, looks like a good one!

Click the related tab above to see all PTGG20 deals.

This deal only lasts until tomorrow night so think quickly. The offer does not apply to selected advertised lines in The Good Guys’ catalogue.

Note: If you are unable to add items to cart try the buy it now option. Note that the code requires an Australian PayPal account as always.