This was posted 2 years 21 days ago, and might be an out-dated deal. 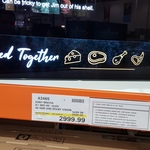 Still have 4 left at docklands not sure about other stores.

Mod 4/9 930pm: See comments for your local store availability (many now sold out)