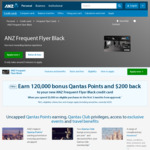 Doing my annual cycle of credit cards and noticed that the ANZ FF Black is running their popular 120k points + $200 cashback promo.

I'm sure there'll be comments about not being able to fly anywhere but $225 for 120k points is still a good deal imo (can always be used on the qantas store, worth about $600 in giftcards).

Personally I'll just be accumulating the points for when I can travel.

ANZ FF Platinum also has a promo of 75k FF points/$295 annual fee/$150 cash back if your income is less than $75k, but you might be better off applying for this deal unless FF points are important to you.