This was posted 5 years 11 months 27 days ago, and might be an out-dated deal. 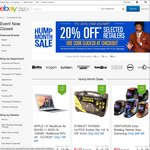 Enter CLICK20 code at checkout to receive an additional 20% off the price at any of the following stores:

Link to search all stores

Use this link to search all click20 deals on Ozbargain