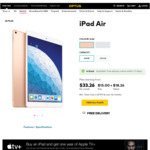 Was about to purchase an iPad 7th Gen but after searching and seeing ONSALE deal https://www.ozbargain.com.au/node/532381

Went into Optus store yesterday and purchased a new iPad Air 3 Celluar outright without any issues at all. Only Gold & Silver seem to be available

Hope this helps anyone in the market right now