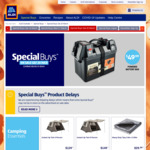 New catalogue, sorry about all the reflections.

Good price on the batteries, I don't remember them doing an 8 pack special before. Beats the regular $5.99 for 4 that they used to have permanently.