This was posted 6 years 6 months 9 days ago, and might be an out-dated deal. 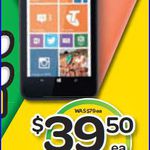 Unlocking Update: aaronbaron just PM'd me stating he received a refund from Bagman, as he can no longer unlock Telstra Nokia phones. He asked if I could add this info to the post. Also, more info here.