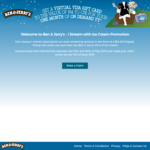 Ben & Jerry’s are giving away a bonus $14 virtual visa gift card with a pint of ice cream, currently $9. The deal is exclusive to Woolworths until 28th May. Limit of one per person!

Welcome to Ben & Jerry's - I Stream with Ice Cream Promotion

Get a bonus 1 month subscription on most streaming services in the form of a $14.00 Prepaid Virtual Visa when you purchase any Ben & Jerry's Pint of Ice Cream!

One claim per person throughout the entire promotion.