December was a busy month with Boxing Day and the lead up to Christmas which marked our busiest month ever in terms of traffic (12,476,792 sessions, 41,218,012 pageviews). However, interestingly Black Friday beat out Boxing Day in terms to traffic. We did 2.41m pageviews on Boxing Day, up 47.25% from last year. However not as big as Black Friday of 2.46m. 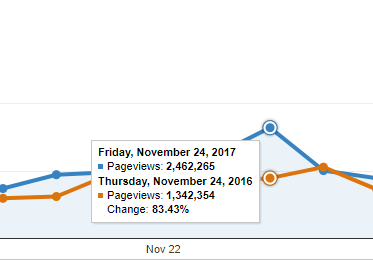 I'm not the only one doing stats around here. Courtesy of BlazinPast, the graph plots Xiaomi deals by month.

Just a reminder, if there is a bug, feature or general comment you want to make, please do so on the Comments / Feedback / Suggestions Thread 2018. Most of the features you see today were because a member had requested it.

Coming up: January and February are the slowest bargain months of the year (awaits annual "no bargains" post). Feb 15 16 is Chinese New Year so expect some good deals from Chinese sites around that time. However, it's also a time when many China based companies shut down so don't be in any rush to get your item or expect a quick response from support. I'll be doing the 2017 Zeitgeist (see 2016) + an updated post for our 2018 goals/improving the OzBargain environment soon(ish).

A trip to ABC's New Year's Eve Countdown Concert for 4 people valued at $5,150